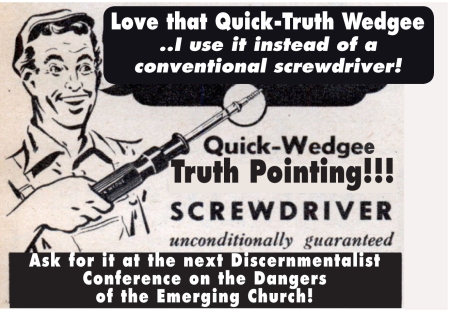 We can do only one of two things….fear them or give them a wedgee!

For far too long we conservatives have had to offer our liberal-emergent-unreformed-post-moderns traditional wedgees….the traditional away.

Although we scorn change, or a new idea  (unless new means something 200 years ago like Wesley adapting bar songs into hymns) and fear anything different we have decided that the new wedgee-assisted-screwdriver is a piece of hardware all truth warriors need to employ in the heated but very needed truthwars. While we agree that this is “new” we think that giving a liberal a truth wedgee is not. We need to come down hard on liberals….because they are the enemy. And since we are ALWAYS right, we’re right on this point as well.

Come on and buy your truth-wedgee-screwdriver today! See you at the next conference.

PS I’ve owned one for over a year!