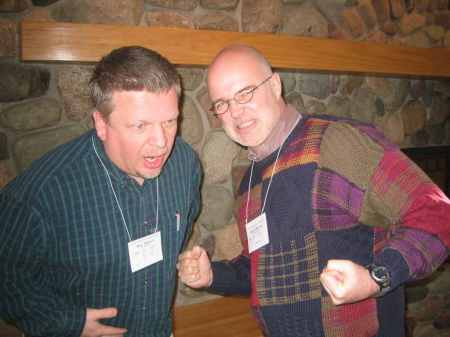 Discernmentalists, we are under direct attack on a daily basis. We need to rally to arms and put on the aggressive defense. Just last month Brian McLaren directly assaulted Uncle Ken Silva and Aunt Ingrid Schlueter of Slice Of  Laodicea. Ingrid was caught yelling in a headlock:

What an appallingly dishonest way to deal with your critics, McLaren.

which  inspired her to write this scathing critique of her ordeal:

Emergent author Brian McLaren doesn’t believe in a literal Second Coming of Jesus. He has problems with the penal substitutionary atonement of Jesus on the cross. A literal hell with eternal torment for those who reject Christ? Not likely. The Genesis account of the fall of man? Not true. But instead of addressing his own spiritual rebellion, Brian appears to want to paint his critics as bigots. In a recent blog post, McLaren demands that what he calls “discernment websites” (he used the quote marks) address an African country’s attempts to codify severe penalties for homosexuality into law. He seems to imply that these same “discernment ministries” would automatically support the arrest and execution of gays by Uganda.

For the record, Brian, that’s a pretty nasty strategy to use against those who point to your heretical doctrinal views. While emergents supposedly are intellectual, open-minded people who enjoy conversations with subtle nuances and lots of mystery, McLaren actually sees things in black and white. Anyone who is not willing to jettison cardinal doctrine and embrace his “new kind of Christianity” is painted as ready to commit hate crimes and would support mistreating gays. What an appallingly dishonest way to deal with your critics, McLaren.

Ken was found wounded in the fray but not hurt. We asked him for comment and all he could murmur was:

It’s interesting this “minister” would place quotations around “discernment websites.” Well, as one of said sites, I can tell McLaren that I personally do not at all “enjoy featuring and critiquing the work” of any of these postliberal rebels against the final authority of God’s Word. The Lord knows that I’d much rather go back to apologetics and evangelizing those lost in the kingdom of the cults.

Indeed this is why we must go back on the aggressive defense and never compromise on preaching the whole ‘discernmentalist’ truth to all liberal, apostate, heretics!

We are under direct assault!

Attention discernmentalists everywhere!!! We all know that Islamic forces are a monolithic, extra-fertile menace that is trying to subvert America and rent our American loving DVD action movies. It is my displeasure (and yours too) to state that Hunting Heresy Hunters suggests that not every Muslim is a threat.

This is what we believe…and it is therefore TRUTH “Muslims, within the span of 20-50 years, will essentially control the entire world because of their numbers;” We also believe that Muslims will build mosques on Mars very soon….perhaps even by 2018 if we do not act fast!

If we don’t have fear and bigotry to use as forces of of defence….what do we have left?

I dare say that EVERY DISCERNMENTALIST must rise up and be fearful!

Trust us, trust me (Truthslayer)….remember when it comes to the truth…we don’t comprimise, we preach the whole ‘discernmentalist’ truth!