Using Eric Barger’s STRETCH and Revisionist Technology and Todd Friel’s Subliminal Brainwashing microwaves Ken  Silva and his loyal band of Discernmentalists have found a way to hit the Preteen/Tween and Teenage television markets. The first of their fruits is:

Weekends at 9:30AM
All times ET/PT
That’s So Discernmentalist is a new live-action situation comedy starring Raven (formerly credited as Raven-Symone, The Cosby Show) as Reagan “Marxist” Basher, a winsome Capitalist-loving teen whose ability to glimpse flashes of the future and know all through perfect osmosis cause trouble whenever she meets Emergent and Red-Letter Christians. Helping her out (or sometimes into) these predicaments are her best friends Eddie Silva and Chelsea Barger, whose loyalty can be counted on whether Reagan’s escapades involve hilarious disguises, hostile government overthrows of corporations by God’s Only Inerrant/Republican Party, exploitation, discernmentalism or a hint of danger. Allowing her flights of fancy — yet eager to keep her feet on the ground — are Reagan’s parents, Victoria and Todd “Emergent” Basher. And then there’s precocious kid brother Cory, who is both an annoyance and invaluable resource to his big sis. Cory not only idolizes Final President Reagan and Capitalism, but the love of money is his total root motivation with all his wacky “get rich quick” business schemes. Watch with the whole family and learn these Discernmentalist values: arrogance, greed, haughtiness, Capitalist Materialism, divisionism, knowing by osmosis, condescending selfishness, avarice, revisionism, strawman arguments, how to listen to only yourself when you  yell and scream at your opponents and much much more…
©GOIP Productions
Length: 00:23
Genre: Children, Sitcom, Comedy
Original Airdate: 2003+7/10 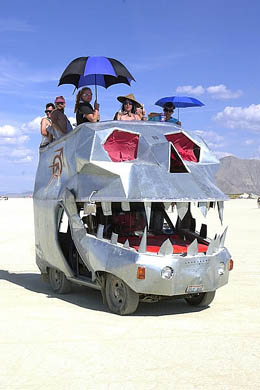 It is quite possible that Brian McLaren is using this demonic inspired, unbiblical monster truck to track down and emulate the desert fathers. It is only a matter of time before foolish and unthinking mainline Christians begin to follow suit and build their own monster trucks to join the emergent mayhem. It was only a short time ago that Dan Kimball’s own vehicle was shown for its true colours – a giant spider monster.

We discernment ministries always take the low ground…. pointing out to anyone who will listen (usually only the most righteous of readers) that everyone who does not agree with us is in fact….UNBIBLICAL.Say it out loud “U-N-B-I-B-L-I-C-A-L” doesn’t that give you a sense of power and authority? Say it again.

Under tutelage from Dr. Walter Martin’s cassette tapes has allowed us to discern the most difficult issues into simplistic cliches. When all else fails we toss in the “you are unbiblical” to settle the issue once and for all. If you don’t have OUR biblical worldview on ALL THINGS….you are not saved. Despite the fact that Jesus says “believe in me,” we discern that what he really meant was be a Capitalist-American-Conservative-Calvinist-Anti-Rob Bell-Pro-Reformed believer….and THEN you will be saved. Its not about Jesus, its about true doctrine.

In addition, please make sure that you NEVER share…that according to ODMs could be construed as Marxism.

What is presumption with reference to discernment?

1. Behavior or attitude that is boldly arrogant or offensive; because we already know what we know.
2. The act of presuming or accepting as true….even if we have not checked, researched or understood another’s position. We simply KNOW our position is correct. See point Number 1.
3. Be bold, brash and pushy. Don’t tolerate dissension. Don’t accept another point of view….except to point out the obvious: Everyone is wrong. If you have to…. name call. Explain that that you have the right interpretation and if they do not get in line they are apostate, false and going to hell. Be snotty because this will help win your case.
Dr. Truthslayer
PS We recommend taking lesson number one first. 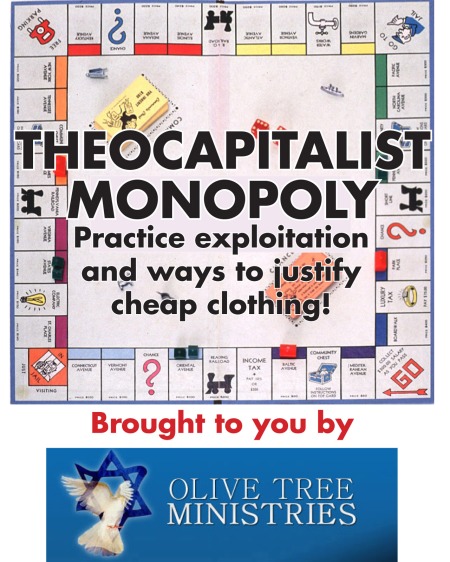 Jan Markell has said “Neither I nor capitalism needs to change. You guys are pretty pathetic,”(actual email transcript). Capitalism does not need to change …YOU DO! If America is going to keep its way of life, billions need to stay in poverty. We think that is fair.

That is why Olive Tree Ministries has introduced Theocapitalist Monopoly. This game allows the youth to develop the tools, means and ability to learn to exploit, undercut and underpay employees and competitors…..just like we were taught in the bible. A supporter suggested “We need to rid the world of pinkos”

Remember what Jesus says “Blessed are those that exploit others, the aggressive capitalists shall inherit the earth.”

We encourage good bible believing parents to get this game as soon as possible to teach your child American Gospelism qualities so that they will be true bible believers. 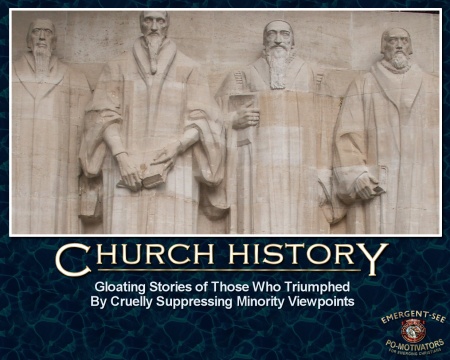 P. P. S. Dr. Arthur  McJohn reminds you to burn an Anabaptist in Calvin’s honor as a prerequisite for taking our course so that we’ll know that you are Truly Hardcore Deformed Reformed enough like these guys are to pass our tests of True Orthodoxy.

As our readers know, the University of the Online Discernmentalist Mafia ( U of ODM) has been offering various discernmentalist studies at the university level. Excellence in fabrication, self-righteousness and so on has now been distilled into these fantastic free online discernmentalist courses. We hope that you find these inspiring enough that you will enroll full time!

So here is lesson number 1. Whenever another ministry is more popular than yours, find out all you can and begin by ‘dissing’ anything and everything you can. Take Rick Warren & Saddleback Church for instance. Hold him up to an impossible standard (because he is well known) and knock him down. Stretch the truth. Take things out of context….do what you have to do to destroy this reputation. We guarantee you will feel more spiritual….but call it discernment.  Make sure you place doubt in the minds of your readers…. that ministry “X” is bad and dangerous.

Popular ministries = bad. Only true ministries that have 4 followers are really authentic….because they are SOOOO biblical only the truly righteous remnant listens to them.

Just remember If other Ministries are more popular than yours, they must be BAD!!!! 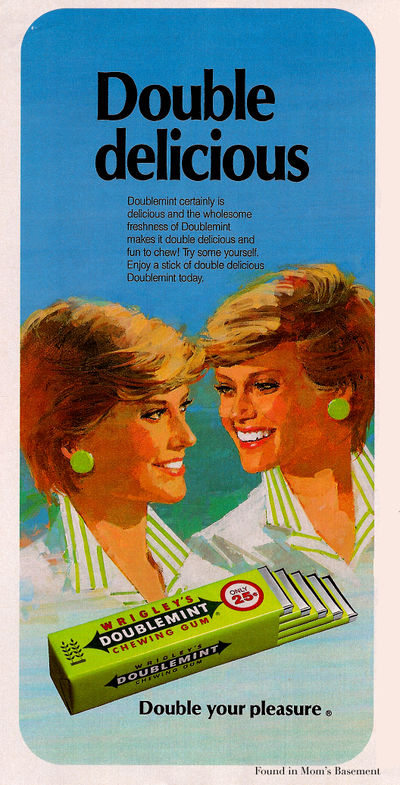 The ODMafia is always focused (like all Online Discernment Ministries – ODMS) on finding evil, and sin even where it does not exist.  We are so attuned to evil that we can see evil even if it can’t be found.  We view this as a gift that is beneficial to all discernmentalists. By twisting, misunderstanding and accusing we expose more evil per capita than any other country in the world. In fact we are world leaders in accusing others. We follow a great number of other ODMS who find evil where there is none. But that takes practice and a skill like no other.

This is why we are FIRST again by finding evil in this gum advertisement. For the uninitiated this is simply a chewing gum advertisement. But for the ODMafia, we know that Wrigley’s Co. is subliminally promoting lesbianism. These two woman are lovingly gazing into one another’s eyes…we can see it with OUR own eyes.

PS We also use long range gay-dar to discern gays. 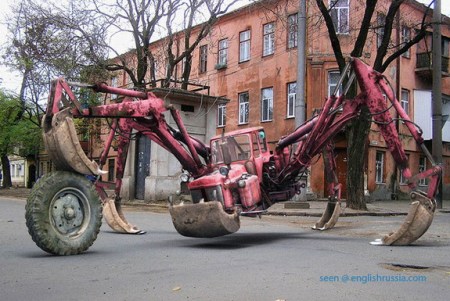 In this startling turn of events our research robot monkeys have been following the seducing sorceress Dan Kimball and his notorious vehicle of doom. Over the course of several weeks we have been watching his every move, expecting the worst and seeing the worst. Only NOW, in an unexpected turn of events did we see Dan Kimball and his emergent car take its true form!!!

We are as worried as everyone else! What if other emergents have the same type of car that begins to metamorph into some hideous metal spider monster? We KNOW what will happen…. soon emergents will rule the universe and destroy everything as we now know it.

If you suspect that your neighbour drives an emergent vehicle….you know what to do – find a PANIC STATION and hit the button.

Together we can stop this menace. 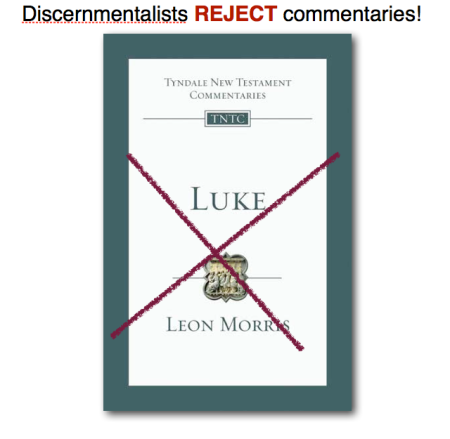 Discernmentalists are too good for bible tools. We don’t need scholars who have spent a lifetime studying a bible book to tell us what the book is meant to convey. In fact, it is up to us to insist on what the text means and enforce that meaning. We purposefully read Calvinist doctrines out of our bibles because Calvin was around from the beginning. We read the meaning we need INTO the text. If America is at war, we can pull texts from their original intent to suggest bludgeoning a foreign country into submission. If we need to prove someone wrong, we have our own, original and unique interpretations to set someone straight.

Bible commentaries are a nuisance for us (especially at the ODMafia), they get in the way of pointing fingers at our opponents. We know that other Online Discernmentalist Ministries think the same way. Just remember, it is all about purity of doctrines MORE than anything else. Most commentaries written are NOT good enough for us, they don’t hold to the truest doctrines that we hold up to…..because we are super Bereans.

Remember what Jesus said… “Bless are those with pure doctrines, for theirs is the Kingdom of God….”