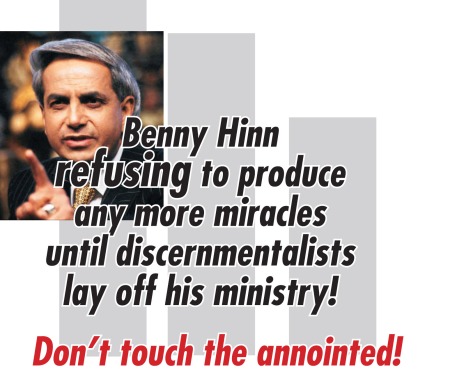 In an unprecedented report that we heard from a friend of a friend Benny Hinn is REFUSING to do any more staged miracles until discernmentalists back-off. He has been under relentless attack by our valiant discernment crowds. Hinn has suggested that he will not heal spines or backbones (usually requested by discernmentalists who seek to be even stronger in their truth warriorness). He will not will he even attempt to accidentally heal a wheel chair or a walker. Numerous times in the past his intended victims recipients have been overlooked in the healings but have found that their cars now start, their walkers fixed and eyeglasses de-scratched.

It is rumoured that Hinn will now only collect money tithes at stadiums and reminisce about his glorious undertakings in the past.

PS We are sadened by this fact since one of our Research Robot Monkeys has been found to have a bum leg and has difficulty walking, we have decided to be less harsh in hopes that Hinn will change his mind.

This entry was posted on Wednesday, February 10th, 2010 at 11:53 am and is filed under Backbone, Benny Hinn. You can follow any responses to this entry through the RSS 2.0 feed. You can leave a response, or trackback from your own site.

One Response to Benny Hinn takes a new turn!