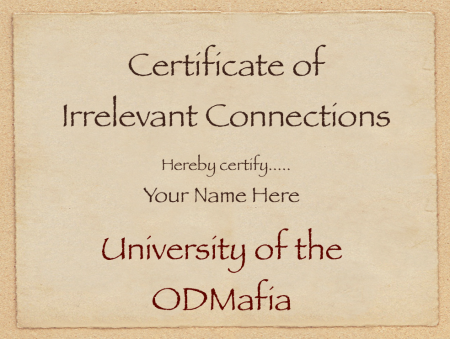 The University of ODMafa excels at being irrelevant to the unbiblical Chrisitian mainstream, but always relevant to true bible believers. By making an argument that includes redundant facts, information that has no connection whatsoever to reality can have its advantage; it confuses people who are against the absolute truth. We believe that by padding our research with information that is not pertinent, or applicable to the argument at hand we think it helps to throw the enemies off. When we mean enemies, we mean the Anglican Church, Church of the Nazarene Emergents, regular Emergent apostates, Arminians, Wesleyans, Roman Catholics (which goes without saying), anyone to who contemplates the bible (ie contemplatives), and people who have read, or endorse any Rob Bell books or feed the poor (in which case they could be communists).

For instance, was Rob Bell once sited with the Dalai Lama? If so that makes Rob a Buddhist. Did Rick Warren pray at Obama’s inauguration? That makes Warren a Democrat and it must mean he fully endorses everything he stands for. Of course the connections could be relevant, but we know that for discernmentalists all connections no matter how minor are brought front and center… and made the focal point of discussion and emphasis.

We believe that this tool of Irrelevancy is so important. We encourage you to enroll in our program today and learn how to throw off the enemies by including non-sense, hearsay, and hogwash to your argument. Confusion and chaos are excellent tools protecting the truth! Besides, I’ll be teaching this course and have learned from the very best discernmentalists!

This entry was posted on Friday, April 2nd, 2010 at 11:10 am and is filed under Democrat, Democrats from Hell, Rick Warren, Right-wing, Right-wing radio, Rob Bell, Roman Catholic, TRuth War, Truthslayer approved / endorsed, University of ODMafia. You can follow any responses to this entry through the RSS 2.0 feed. You can leave a response, or trackback from your own site.