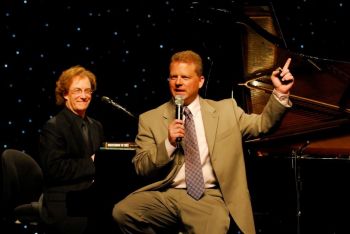 Our readers already know that Brannon Howse leads the way in spreading hatred against Rick Warren.

Here is an excerpt!

Rick Warren states in his book The Purpose Driven Life that end-times issue are really known of our business. Really? What does God say about this? What has John Piper had to say about end-times issues and why is he not a supporter of the nation of Israel? John Piper is showing a serious lack of discernment in this decision. Is it possible that Piper was taken in by the Warren personality and not the facts?

Now, we can include John Piper to the list of heretics! We are so happy to find someone who is as well known as John Piper and rejoice that Brannon Howse is getting the word out about how horrible Piper really is! Brannon Howse is known for his radio show where he rails against about everything indiscriminately! He is also know for his praise and worship fundraisers against Rick Warren with the help of  his friend and ASSOCIATE, Marty Goetz. (For some reason Brannon Howse can overlook that Marty performs at Purpose/Seeker Driven Churches… but for now we will overlook Brannon’s lapse of discernment for performing with Purpose/Seeker Driven Church supporter, Marty Goetz (Marty performed at a Purpose/Seeker Driven church in Monterey Ca. in the late 1990’s). Maybe one day Brannon Howse will see his error in this and we will have a separation of the sheep and Goetz?

Now, what does John Piper have to say about all this… who cares, but here is his explanation.

Now, who are you going to believe? Known heretics or us?