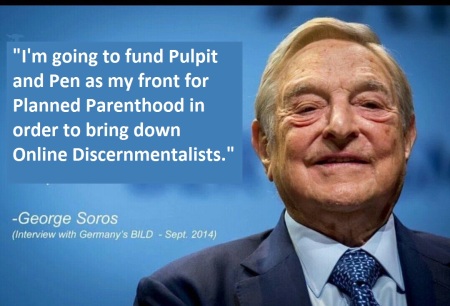 It took longer to recharge our Research Robot Monkeys than we thought as we had to recalibrate Eric Barger’s Smocking Gun machine for them to use. Afterwards they stumbled upon this quote attributed to our boogie man George Soros on a site run by QAnon members which means it must be authentic . This proves the smocking guns against Party & Propaganda aka Bulpit and Pen now Planned Pulpithood (PP) that Eric Barger’s machine found since George Soros (Nazi man in picture in his 20s when Soros was around 9 years old at the outbreak of WWII) funds abortionists and crisis actors.

In fact Planned Pulpithood themselves have stated that  George Soros (Nazi man in picture in his 20s when Soros was around 9 years old at the outbreak of WWII) who funds abortionists and crisis actors also funds Evangelicalism and SBC groups of which Planned Pulpithood are a part of. Quote:

Pulpit & Pen (aka now as Planned Pulpithood) has been exposing George Soros’ funding and partnership of Russell Moore and James Riady’s funding of Ligon Duncan. In reality, both Soros and Riady have been funding numerous groups and speakers who are represented at the The Gospel Coalition, Together for the Gospel, and the Ethics and Religious Liberty Commission. However, much of their funding is “Dark Money” contributions that come not directly from Soros or Riady, but from a series of “foundations” (sometimes the cash goes through nearly a dozen foundations before it reaches institutions like SBTS, TGC, the ERLC or RTS).

We also now have reason to suspect that George Soros (Globalist Billionaire) funded the people that inserted liberal unbiblical Bible verses such as these into our Pure Bibles:

“After the devil there is no greater human enemy on earth than a miser and usurer, for he desires to be above everyone. Turks, soldiers, and tyrants are also evil men, yet they must allow the people to live . . . ; indeed, they must now and then be somewhat merciful. But a usurer and miser—belly desires that the entire world be ruined in order that there be hunger, thirst, misery, and need so that he can have everything and so that everyone must depend upon him and be his slave as if he were God.” “Daily the poor are defrauded. New burdens and high prices are imposed. Everyone misuses the market in his own willful, conceited, arrogant way, as if it were his right and privilege to sell his goods as dearly as he pleases without a word of criticism.” “He who has nothing to live should be aided. If he deceives us, what then? He must be aided again.” —Luther on Usury

Thankfully there’s no real dirt on the Billionaires that fund our pet causes.

One Response to Extra! Extra! Smocking Gun: Pulpit & Pen/Planned Parenthood One and the Same! More Evidence…