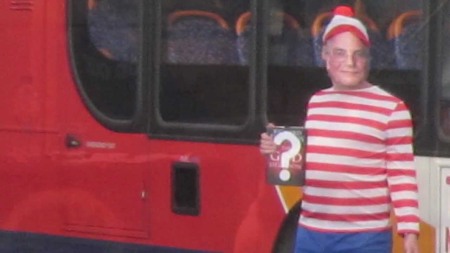 SoL is on the case again when they describe one Ron Heather, a bus driver in England who refused to drive a bus that was emblazoned with atheist slogans. SoL noted “Three cheers and a Slice Salute to Mr. Heather for taking a stand.” We at the Online Discernmentalist Mafia also applaud Ron Heather for making Christians everywhere look like morons. Our research robot monkey was on hand to comment “Whenever Christians can protest over non essential drivel or complete stupidly we are fully there to support them!” 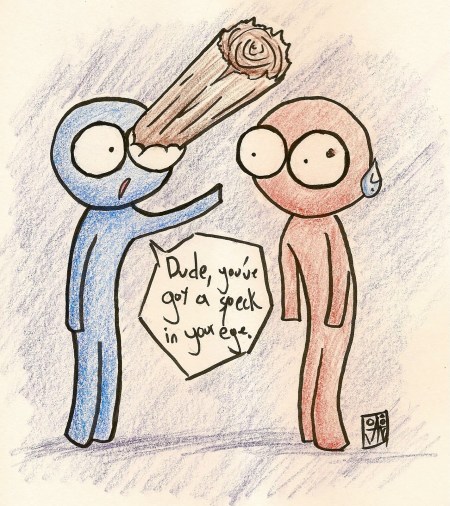 Tolerance mongers seem to have found the one absolute truth they are willing to live by. How many times have you heard someone say, “Judge not lest you be judged”? The statement has become the great American open-mindedness mantra when anyone has the courage to declare that someone else’s belief, actions or lifestyle is morally amiss.

Another form of the same non-judgmental judgment is “that may be true for you, but it’s not true for me.” The logic behind the statement goes something like this: “Your truth is your truth and my truth is my truth. We are both right, and I hold to my opinion of truth.” The last time I checked, it was impossible for two chairs to occupy the same space around my dining room table, but evidently such rules of time, space and logic don’t apply to tolerance philosophy.

Postmodernism’s live-and-let-live concept of truth argues that even two opposite and wholly contradictory claims can both be true. This is as stupid as saying that black and white are the same color. Yet, it clarifies the absurdity of the postmodernism we are all supposed to blithely accept as the fundamental principle by which we respond to each other’s ideas – the “please and thank-you” of philosophical respect.

So beware. If you dare claim that another person’s truth is not, in fact, truth but is, in fact, wrong, you are not only being intolerant but you are also being – Mantra forbid! – judgmental.

Now What Is Judging? according to this pamphlet—there are two main factors:

Judging involves two main factors. First, it involves a pronouncement concerning whether something is right or wrong. It is to be critical. In fact, the noun ‘judge” in the New Testament of our King James Version is, in most instances, the translation of the Greek noun kritees, from which is derived our English word “critic.”

In being critical, one does several things. First, he observes an action or hears an opinion of another person. Second, he evaluates what he has observed, considering the positive and negative aspects or implications of the action or opinion. Third, he reaches a conclusion and expresses an opinion regarding whether that which he has observed was good or bad. To use the example of a judge who must adjudicate a criminal case, we would say that he first receives the evidence against the accused, then weighs the evidence, and finally expresses his conclusion regarding the innocence or guilt of the accused.

The second main factor involved in judging is that of sentencing. If the judge finds the accused to be guilty of the crime, he sentences him to an appropriate punishment. If the judge finds the accused innocent, he lets him go free of punishment. To order the release of the one who is acquitted is also a sentence: the innocent person deserves life.

In saying that the Christian must judge, we have in mind primarily the first sense of judging, that of deciding what is right and what is wrong. All Christian judgment involves such a determination. However, only in some instances will our duty to judge also involve pronouncing a sentence. For example, when a consistory excommunicates an impenitent sinner from the church, a sentence is pronounced — one of death, of life apart from God, of exclusion also from heaven (Matt.16:19). Even in such a case, this sentence is always contingent on the sinner’s continued impenitence. The consistory never pronounces it absolutely, because God is the ultimate judge who gives a sentence. In many instances, the Christian who judges whether another’s actions are right or wrong must leave the sentencing to God. This is because, although all of us sin and deserve of ourselves to die on account of our sins, Christ bore the sentence of death for the sins of God’s children, while He did not bear this punishment for those who are not God’s children. God will sentence to everlasting punishment those who are not His children, and to everlasting life those whom Christ has redeemed.

The Sickness in Discernmentalist Ministries

Become  a part of the Deformed and Discernmentalist Southern Baptist unTwitterati Cabal today by mocking those who have fallen gravely ill. We are now accepting applicants. If you feel the current evangelical leadership (JD Greear, Russell Moore, Al Molher, Beth Moore, Tim Keller, etc.) are becoming evil libruls because they’re starting to acknowledge the existence of racial disparities in the criminal justice system—you’ll fit right in with us.

Just like Pastor Gabe we Discernmentalists believe sickness is a symptom of lifelong sin. We also believe we should be discernmentalizing 24/7—finding a new heretic of the week:

As a former news-junkie, I’ve often lamented the advent of 24/7 news. It has done more harm to journalism than any school of journalism (with all of their agendas) could have ever accomplished. Today, 24/7 news has created a feeding frenzy around every speculation, hearsay, possible motive, or misspoken word. The men and women formerly called journalists have an audience waiting to hear something new, and the industry demands that our network get it out before your network. So, rather than well-researched facts, so-called journalists are spitting out every kind of agenda-based opinion, to the point that fake news has become “a thing.” Have you notice how many “breaking news alerts” you hear on the 24/7 news channels? Events that have been scheduled for weeks are “breaking news.” Why the hyperbole? It is because of the feeding frenzy.

Discernment ministry has grown to this level as well. Those who have built their ministry around this work now have a constituency that they must feed. There is an expectation that the so-called discerners bring forth a new heretic of the week. After all, we already know about the other heretics, we’ve left their teaching, we are bored with them, and we’ve already posted the warnings on social media. But this is a new day, and discernment ministries have an empty blog and a silent podcast to fill.

The world is full of liberal sickos and they’re all out to get us. We’d like to thank Pastor Gabe for helping us spread the Discernmentalist Gospel.

The mighty righteous have spoken! Tremble in your seat… 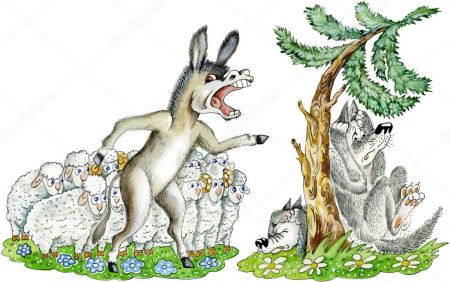 The mighty righteous Voice of the Sheep has spoken!

Voice of the Sheep notes ” Reading this blog may be hazardous to your man-centered doctrines, challenging to your unsupportable presuppositions, and just plain detrimental to your Arminian heresies. This blog has been known to cause high blood pressure, nose bleeds, headaches, stomach ulcers, gasping for breath, hyper-tension, dizzyness, nervous twitches, sudden angry vocal outbursts and light-headedness. If you experience any of these symptoms, stop reading immediately and consult the Word of truth. If you are susceptible to any of these because of your general lack of preparedness to give a defense, then please think twice before posting…you WILL be asked to defend what you say! All others are asked to leave their timid and easily-bruised egos at the door. Thanks for reading…”

Fellow discernmentalist….we tremble, our knees knock, our teeth chatter at your fearsome and rugged individualistic reformational sensational outburts. We are glad that you are on the side of righteous indignation, and that you cause others nervous twitches, nose bleeds and stomach ulcers…because we like to think that Jesus too brought stress, strain and frustration – what a marvelous example of humility you bring to the world! We are pleasedto note that despising arminians and suggesting that they are heretics that you have in fact thrown two well known and respected 18th century reformers into the category of heresy; John and Charles Wesley. Well done… let’s fine some more upstanding believers to throw out! If it makes you feel good…it makes us feel good too.

I suppose that only a true discernmentalist can add his pet doctrines to the gospel and yet still remain orthodox himself…of course always self proclaimed!

Truthslayer—those who know me hear my voice

SOL Blast from the Past News Reprints— Slice of Laodicea recently sent reports to China to investigate the Official Protestant Church in China that seeks to persecute true believers. SoL notes “Maybe Franklin Graham can explain his own widely hailed participation with the communist “church” when he preached at a communist “megachurch” back in May of 2008.” ODMafia however was excited that so many evangelicals backed the capitalistic government of America by providing over 1 million Iraqi’s a free ticket to a grisly death thru bombs and mortars in the name of freedom and democracy. ODMafia’s expert robot research monkey’s were quoted as saying “we think that invasions of foreign lands and the maiming of others in the name of spreading democracy is bible approved….as long as it is us doing it and not the Iraqi’s.”

We at the Online Discernmentalist Mafia approve of any and all invasions of foreign countries as long as it is OUR side that is doing the invading and destroying…because it is bible based!…and they are wretched unbelievers!

The Good Old Days of the Christian Church

Super discernmentalist Paul Proctor notes “Driving across town the other day, I passed by a church that always displays an inspirational message on their sign out front. Such messages are very common these days and often quite thought provoking. The one I saw most recently had me thinking all the way home.

It read: “Churches are hospitals for sinners, not museums for saints.”

“How sad and true, I thought to myself. Churches have become hospitals for sinners, haven’t they? They used to be spiritual fortresses built in enemy territory where soldiers for Christ were recruited, trained and equipped for doing battle against sin and evil in society with open bibles, convicted hearts and committed lives.”

We at ODMafia like the good old days when we could burn heretics at the stake. Or going further back in time, like St. Paul’s Corinthian church (the golden age) where good old fashioned believers had sex with their step  moms and they got waisted during communion. Sigh….we wish we could go back to when times were better.

—ODMafia fortified with Our Truth