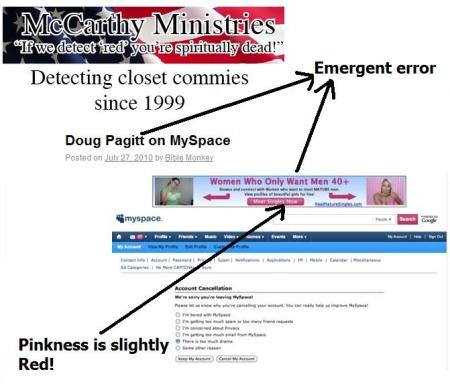 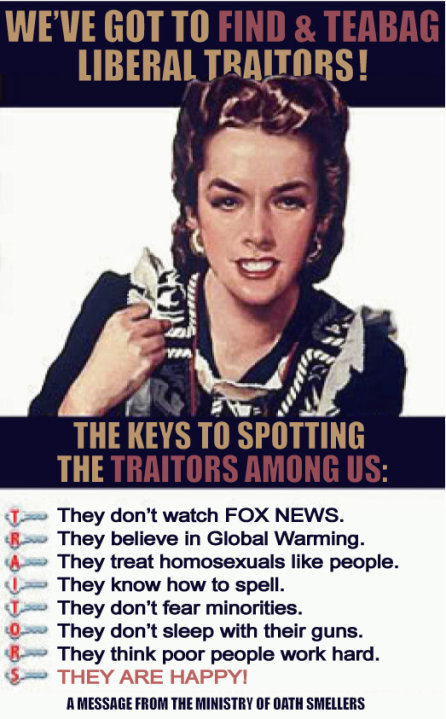 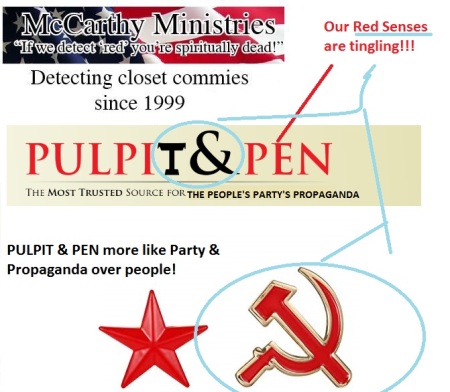 Partnering with our old allies in our Truth War again: McCarthy Ministries have detected subtly subliminal communist propaganda in our once ally now enemy: Pulpit & Pen. Now we have even more reason to suspect them of not holding true to our Doctrines and have no other choice but to put them on our Watch-list. This is all-concerning because Pulpit & Pen themselves have taught:

While researchers have uncovered the political motivations and corrupt cash being spent by men like James Riady and George Soros and laundered through The Gospel Coalition, most should be able to admit that it’s parachurch ministries that are driving the Social Justice Bandwagon.

Social Justice is an ideology birthed out of Critical Theory and Libertion Theology, the product of a wedding between Italian fascists and South American Jesuits, in which Marxist thought is combined with Theism to bring about political change.

But now this—our old allies McCarthy Ministries have detected Red so now we must call all True Truth Warriors to continue to unite with us and help us take a stand against Pulpit & Pen aka People’s Propaganda aka the Pinko’s Party. We must also continue with our bombardment campaign of them using our Weapons of Massive Destruction. Thankfully you have True Online Discernmentalist Ministries like us to warn you of all those straying off the  True Path set before us by the Protestant Reformers who just like us didn’t believe in “Social” Justice—especially not Martin Luther the founding father of the Protestant Reformation.

Don Jobson and Truthslayer—-manning the Massives while I. Todyaso is conducting our business affairs. 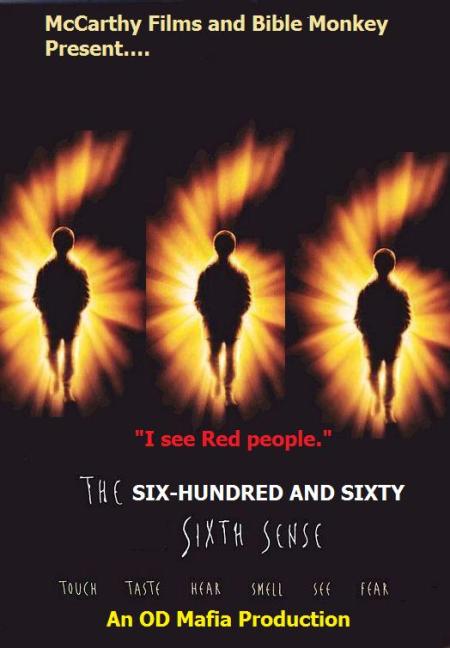 Subtlety no object for true discernmentalists! 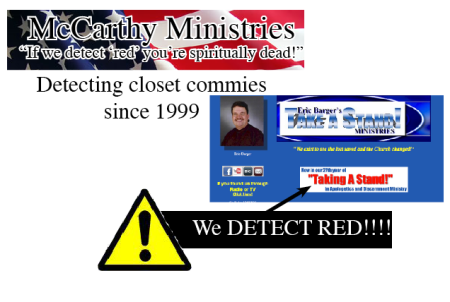 Since our partnership with McCarthy Ministries we have been hell-bent on detection of social gospelers, communists, closet commies, universal health-care enthusiasts and people who share their private possessions. Unfortunately far too often communist sympathizers go undetected or worse commie proselytizers are left to wander the streets and eat our food and drink our water. We are shocked and dismayed to find Take A Stand Ministries secretly promoting and peddling socialism while pretending to be a true bible believing ministry. It just makes me ill. It did not take us long to detect RED in his “Take A Stand” logo. He has secretly embedded his socialist message not in his heading but below it to throw off readers (ie to make them feel less threatened by his red faced secret socialist message, slowly undermining the gospel).

We can’t be fooled.

Don’t be fooled either. Remember if its red, its wrong!

PS We have reason to believe that if Take A Stand is “red” they are likely Red Letter Christians and sympathetic to Emergings! 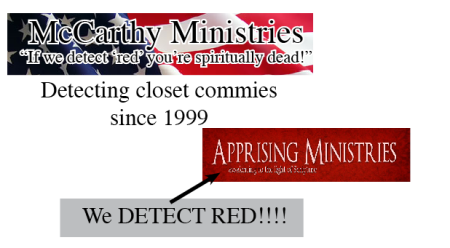 It wasn’t long and McCarthy Ministries and ODMafia have already detected communists amongst our supposed discernmentalist ranks. It just makes me so angry, so frustrated that we would be betrayed by one of our own. But being the biblical ministry that we are, and trusting in the truthfulness of the bible more than others we had to come out and simply state the truth. Apprising Ministries uses FAR too much red in their logo-header and web page….this should set off alarm bells because Communist China and USSR both used red in their flags. Speaking of “bells” Rob Bell once questioned sola scripture. Simply having a question about this theological construct is enough for us discernmentalists to state emphatically that Rob Bell does not believe in the bible.  Fans and interested readers – Are you drawing the same insightful parallels as we are? If you are not, you probably are very BAD discernmentalist, or a complete failure or a false teacher like Rob Bell -besides  you are totally unbiblical and had a doubt in your mind at some point.

Finally, anyone who has too much red is probably a communist. It is best to assume guilt until proven innocent. By that time rumours will abound so extensively across the internet it won’t matter – you will be labled and branded whatever association we decide.

Please note that we found that former non-discernmentalist Slice of Laodicea is also linked to communism even before our mighty partnership with McCarthy Ministries.

We proudly support them…

Taking off where Senator McCarthy should have left alone, we welcome McCarthy Ministries in full partnership with ODMafia. We also believe they if we suspect you of ‘red’ you are probably spiritually dead as well. In fact the only good commie is a dead commie.

How do we define commie?

3) You think sharing your possessions is biblical.

4) You believe that Christians should be socially engaged in aiding the poor.

5) You are not troubled by the word ‘social’ in a sentence.

6) You believe that some form of universal health care could be beneficial.

If you detect any one of these attributes in ministry, friend, family or enemy REPORT them to us at once so that we might discernmentalize them immediately. Remember, we have FOURformidable foes battling the church today; Islam, Emergents, people who use candles in worship and Commies (remember this is absolute biblical truth). We must do our do diligence and fight these enemies. Remember, our weapons are of flesh and blood, in name calling and verbal attacks!

Stay with me friends…we must fight!