Where you have Islam bad things always happen

“I wonder if the same people would say the same things about Islam. Just wondering…..I was just doing what the socialists do on every Islam thread. Now that hypocrisy has been exposed……Use others peoples money unwisely…Today’s socialism is all about control..I have friends who are catholic but they have been seduced by Satan and are not true Christians….Your opinion is therefore irrelevant….No you do not accept the facts that most Roman Catholics do not practice basic Christian teaching.”—Mr. Kish. I believe Kish is filling in for Sandi – she handles the “There are no good Muslims because of Islam” concession here at RNS.

ElSandi said so—that makes it so. All we need to know about Islam we learned on 9-11. Muslim apologists are a politically correct sickness. People remember Islamic terrorists events more because there are so many of them. The only reason they are immigrating to North America is to act as the Trojan horse for their god.

I’ll admit that the “lone wolf” approach of most rightwing extremists is ugly and awful because these people plot what they’re doing well in advance and seem quite trained in weaponry, just like the Islamic terrorists that the left so ardently defend. That S.O.B. in Christchurch clearly knew what he was doing and could probably duke it out physically if he had to. Disgusting.

Meanwhile, the P.C. ninjas on the left are sad, stupid physical specimens–the women are usually fat and more physically intimidating than the waiflike men. And they mostly flail around swinging their arms stupidly and suckerpunching anyone and everyone without discrimination…except for blacks/Hispanics/gays who challenge leftist orthodoxy; they hate them the most! But what’s sad is how much support they receive by other leftists. It’s so bad in Portland that the police are told to stand down to make way for this “anti-fascist protest group” that smashes windows, beats up elderly men, bombs ICE detention centers, and shoots up ballparks or country music festivals in Las Vegas (yep, the media desperately covers up that leftist mass shooting!). We have mayors and even governors (Virginia) who are perfectly okay with this. Unreal. And just like the Klan that serves as a major source of inspiration, the AntiFA do everything with masks on. It was Democratically controlled South in the 60s when the Klan go terrorize blacks with full support from the political class; it’s Democratically controlled cities where KlantiFA can operate unchecked. History repeats itself.

Getting back to Chick-Fil-A—lest we forget as my esteemed colleague and ever-Discernmentalizing co-Truth-Warrior in the truthiness of John MacArthur’s Truth War (PBUI) Dr. Pastor-Teacher I. Todyaso has reminded me that there are other restaurants among us compromising our Discernmentalist values. We mustn’t stop with just our campaign to re-sanctify and re-Christianize chicken restaurants when unbiblical seafood restaurants are allowed to exist. If these restaurants continue to align with dark forces that go against our Doctrines and compromise their stand by caving in to bullies—we Discernmentalist Christians will stop supporting them and they will die out. That’s why:

We must rally all our fellow Discernmentalists and Truth Warriors to bring all of God’s law unto the heathens and the sodomites. We call upon all Christians to join us in the crusade against Long John Silver’s and Red Lobster. Yea, even Popeye’s shall be cleansed. The name of Bubba shall be anathema. We must stop the unbelievers from destroying the sanctity of our restaurants.

Our Gospel from the Bible is Clear:

We’ve even heard unbiblical seafood leads to all kinds of evil including having ties to the Mafia—so much evil that lobsters have even wrecked empires. Shrimp have been implicated in various scandals over the years.

The labourers come from Thailand’s much poorer neighbours Myanmar and Cambodia. Brokers illegally charge them fees to get jobs, trapping them into working on fishing vessels and at ports, mills and seafood farms in Thailand to pay back more money than they can ever earn.

“Sometimes, the net is too heavy and workers get pulled into the water and just disappear. When someone dies, he gets thrown into the water,” one Burmese worker told the non-profit organization Verité commissioned by Nestle.

“I have been working on this boat for 10 years. I have no savings. I am barely surviving,” said another. “Life is very difficult here.”

Praise the sovereignty of the commendable hatred of the Great angry God of our Truth War Doctrine! We are angry that more so-called Christians would celebrate Rosa Parks’ fight for social justice than there are True Christians celebrating the great and Godly work of Oliver Cromwell .

There will be many evangelicals, along with the world, who laud Rosa Parks today. Already, as I write, one influential blogger has stated “one of the things we can be thankful for is the gift and grace of Rosa Parks.”

She will be remembered and touted as the female hero of 1955 who stood against injustice and one who possessed the courage, the intestinal fortitude to stand defiantly against an ungodly law of segregation; a woman who had ‘rights’ as a human being, and demanded, in her own quiet way, to have them.

When did it become ‘Christian’ to celebrate criminals? She is not a hero, what she did was wrong and her exaltation by many evangelicals is nothing short of idolatry and the attempted robbing of God of His glory.

Political correctness and multiculturalism stinks on some days worse than others. This is one of them. I’ll make this short.

Rosa Parks broke the law, and what happened? She received decades of accolades and a state funeral, earned Presidential/Gubernatorial proclamations ordering flags at half-staff.

Think about this. This woman broke the law, and yet, after she died:

She is honored for breaking a law. We are a nation of laws. Right or wrong, citizens must obey the laws of this land – unless those laws cause us to disobey God in His written Word. There are legal ways to make amends of unjust laws, and procedures to follow. Rosa Parks light-minded defiance of the laws of the land is a poor, even sinful example, and should not be held up as a courageous act, unless you want to talk about sinning courageously. (Source: 5ptSalt)

We at the ODMafia proudly salute 5ptsht in keeping up our noble war for John MacArthur’s war for Truth (PBUI)—and helping us vilify heroes and celebrate villains. May our Truth War for God’s Holy Wrath prevail!

Using Jesus as our Weapon (Reloaded)! 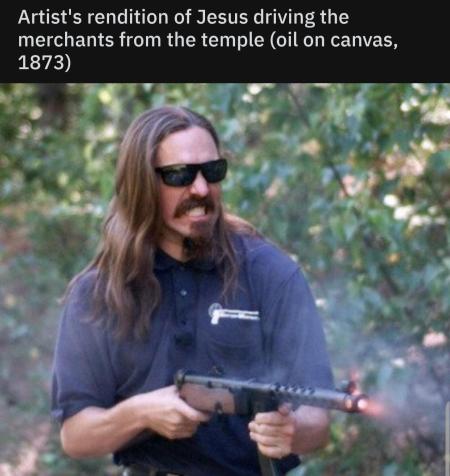 Jesus don’t backpedal, HE don’t play, and HE ain’t politically correct. Just don’t use Jesus as a non-politically correct weapon against our political doctrines like capitalism and guns as only we Truth Warriors have the divine call to tear a new hole in others. We know that we’re right because we’re RIGHT just like the Bible says as we knew our Discernmentalist teachers “disciplined” the left-handed students in our classes with a cane and forced them to write with their right hand. That was in the mid-sixties. We were told the reason was because writing with the left hand was a sign of the devil. When I grew up I learned that measure of “discipline” was administered because in holy scripture it says that Jesus sits at the right hand of God. Get it? Because Jesus sits at God’s right hand everything having to do with the left must therefore obviously be of the devil.

The world can all go out and support immorality for teenagers and adults, Christ will not. He is the same yesterday, today and forever – He doesn’t change except when we changed Him to support our Republican agenda; America First; guns and warmongering; etc. For as we always have taught that Jesus is our weapon, we can use Him to abuse those who we deem less deserving of God’s grace than we are and that He hates leftists or anyone suspected of leftism or even appearing and sounding leftist most of all. So, we encourage all those who follow the Online Disernmentalist Mafia Creed to go forth in joy knowing you are doing the will of our Doctrine and Our God.

Don Jobson inspired by I. Todyaso

Discernmentalist News Networks note: DUBAI (Reuters) – After Discernmentalists organized themselves into New Adherence (to) Truth Organization (NATO) ….NATO’s wing in Yemen said it carried out the suicide attack that killed heretics this month in retaliation for their country’s ties to the U.S.-led “heretic awareness week,” according to an Internet message.

South Korea, which once had the third-largest contingent of Discernmentalist soldiers in Iraq, withdrew all of them last December. On Friday, a Korean newspaper quoted a top government official as saying Seoul had decided to send about 1,000 mainly truth-engineering troops to Afghanistan in response to an unofficial U.S. request.

New Adherence (to) Truth Organization (NATO) promises to continue to use a typical American approach to worldly affairs: extrapolate the realities of our country (America) to the whole world.

Let us re-cap AGAIN the great and brave words of John Hagee: “Israel’s time of need is now. There is a new Hitler in the Middle East –President Ahmadinejad of Iran — who has threatened to wipe out Israel and America and is rapidly acquiring the nuclear technology to make good on his threat.”  Yes Yes – Ahmadinejad rants….but what ODM does not????

Still Iran must be a GRAVE threat…because they spend LESS money on their military than Canada but MORE than Mexico (two very dangerous countries)….and we know that Canada constantly threatens China, Russia, Great Britaina and Luxemburg. We also know that US authorities as well as Israeli authorities note that Iran is pressing to build a bomb. Despite the fact that the younger generation of young people like the west (including America) we will ignore all these facts (that is what ODMs do!!!!)

Think….WMD in Iraq, impending invasion of the big bad army in Nicauragua in the 1980s, the threat of Granada or the communists in Vietnam….we need only place simply faith in our government – who always tells the truth – like us ODMS!