And we wonder why young people are leaving the church?
So the women who announced/preached to the disciples that Jesus was risen where wrong?
As were the many women who had house churches mentioned in Acts and the Epistles?
I don’t think so. 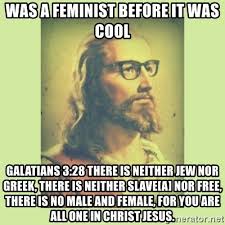 Be A Literalist!: Part 2

“I actually do think parts of the Bible are more valuable than others, more inspired than others. In fact, I think that some parts of the Bible have been put aside by the Christian revelation.”—Quote by Cecil Sherman, your typical Anti-Bible Biblically Illiterate unregenerate non-Christian Liberal Baptist apostate reprobated and heathen  heretic.

Your official instruction: We must think only in binary terms. Everything is black and white, either this or that—there are no in-betweens. Brainiac our field agent for Todd Friel (Wretched) says:

We agree as metaphors do not exist in the Discernmentalist Worldview. Everything literally means what it says as long as it doesn’t clash with our Pure Doctrines and even if it does we’ll find some way to spin it literally such as: “Οὕτως γὰρ ἠγάπησεν ὁ Θεὸς τὸν κόσμον, ὥστε τὸν Υἱὸν τὸν μονογενῆ ἔδωκεν, ἵνα πᾶς ὁ πιστεύων εἰς Αὐτὸν μὴ ἀπόληται ἀλλ᾽ ἔχῃ ζωὴν αἰώνιον” doesn’t literally mean “For God so loved the world, that he gave his only Son, that whoever believes in him should not perish but have eternal life”—but literally means that God literally loves and literally only died for the Elect and the Elect only literally.

We Know that in Psalm 137:9 God literally commands us to “take our babies and smash them against the rocks!”—though we literally stand against abortion. We Know that I Timothy 1:9-10 is literally about gay marriage. Everything in the Bible is about our American Gospel and can literally be summed up by our moral stances in Politics. However when Jesus says “Sell all your possessions and give to the Poor and follow Me (Matt. 19:16-26;Luke 12:33-34 and 14:33) ” He doesn’t literally mean that.  We  like the parts of the Bible that fit our Pure Doctrines but ignore the verses that we do not agree with, that do not make us comfortable in our American values and/or do not back up our Discernmentalist Worldview.

Our interpretive lens of the Bible is flawless and therefore Inerrant for the Bible and not Jesus is literally the literal Word of God (John 1:1) as John MacArthur literally states:

Neo-orthodoxy’s attitude toward Scripture is a microcosm of the entire existentialist philosophy: the Bible itself is not objectively the Word of God, but it becomes the Word of God when it speaks to me individually. In neo-orthodoxy, that same subjectivism is imposed on all the doctrines of historic Christianity. Familiar terms are used, but are redefined or employed in a way that is purposely vague—not to convey objective meaning, but to communicate a subjective symbolism. After all, any “truth” theological terms convey is unique to the person who exercises faith. What the Bible means becomes unimportant. What it means to me is the relevant issue. All of this resoundingly echoes Kierkegaard’s concept of “truth that is true for me.”

Thus while neo-orthodox theologians often sound as if they are affirming traditional beliefs, their actual system differs radically from the historic understanding of the Christian faith. By denying the objectivity of truth, they relegate all theology to the realm of subjective relativism. It is a theology perfectly suited for the age in which we live.

And that is precisely why it is so deadly.

This is why we must always interpret the Bible literally except for when it literally disagrees with our Pure Doctrines so take heart fellow Discernmentalists and remember these wise  and literal words of Brainiac:

Be a literalist. Read the Bible literally. If anyone objects, ask him if you should consider his objection literally. Or, you can explain that the Bible is literature, and that there is no other way to read it but literally.