“The clouds roll with thunder, that the house of the Lord shall be built throughout the earth; and these frogs sit in their marsh and croak ‘We are the only Christians’!”–Saint Augustine on the Donatists

“Christianity downgrading 500 years after Martin Luther posted his 95 theses to that church door.” says our Holy anointed Prophet; grand poobah; Most Illustrious; Most Inerrant; Most Infallible Pope of all Truth over the Truth War John MacArthur (PBUH). Now we know our Truth is downgrading as we’ve caught many among us teaching the heresy of Baptismal Regeneration* against our Clear Teachings on it’s Pagan-Catholic Origins. And we wouldn’t want anything Catholic in our churches nor to appear Catholic like calling Mary the Mother of God:

“So that whereas the Scriptures say that ‘God redeemed his church with his own blood,’ or that he was ‘made flesh;’ or whereas, in a consonancy thereunto, and to obviate the folly of Nestorius, who made two persons of Christ, the ancients called the blessed Virgin the Mother of God,–the intendment of the one and other is no more but that he was truly God, who in his manhood was a son, had a mother, did bleed and die. And such Scripture expressions we affirm to be founded in this ‘communication of properties,’ or the assignment of that unto the person of Christ, however expressly spoken of as God or man, which is proper to him in regard of either of these natures, the one or other, God on this account being said to do what is proper to man, and man what is proper alone to God, because he who is both God and man doth both the one and the other. By what expressions and with what diligence the ancients warded the doctrine of Christ’s personal union against both Nestorius and Eutyches, the one of them dividing his person into two, the other confounding his natures by an absurd confusion and mixture of their respective essential properties (Mr B. not giving occasion), I shall not farther mention.”—John Owen**

I hope this shows where we stand in the downgrading of Truth—thankfully we have our Beloved Pope (PBUH) to show us the way as he (PBUH) has passed his knowledge on to us. In fact Dr. Itodyaso once preached on this very subject:

We know that Discernmeentalists are the purest of all “reformed” groups. It has been evidenced that since 1961 the SBC is becoming more and more Reformed. That should prove the deep history of the effect Paedobaptiphobe Baptists have had on the Reformation since Luther hammered the 95 Theses to the Wittenberg Door and set the enslaved celibate priests free to marry and drink beer (though Luther’s beer was non alcoholic as Jesus’ wine was!!).

Without the great teacher and historian John MacArthur (PBUH) we would all be lost in the history that so many claim is Christian history. We would not see the Truth of the Truth War that Real Christianity started in the 16th century with the Reformation. And that the Holy Spirit stopped speaking in the 16th Century-17th Century when the King James fell from Heaven and the oracles of Reformers dropped their founts of wisdom and  as soon as the Bible was written the Holy Spirit left so that no more miracles might happen. We now only have the Bible and God who is far away in heaven and Jesus who is on the throne in heaven and really has nothing to do with us until he returns and savagely kills all the apostate emerging church people; Catholic mystics and hippie Quakers or those who thought they got saved through women preachers and their sodomite loving ways.

We know the truth will set you free and we freely set it free so we can protect it and use it as a weapon against anyone that does not agree with us and our doctrines. Our weapons of spiritual warfare are not carnal but they are out of our doctrinal beliefs and out of correct beliefs. If  you do not believe as we do then you are just guilty and  worthy of our attack in the Name of our wrathful and angry God who hates sinners. We know that this type of belief is hard, yet we must not let easy believism corrupt the church. We must make it as hard as we can for someone to be saved by us via John MacArthur’s “doctrines” of Grace. So help us to help John (PBUH) spread the downgrade of our Truth for “to come to knowledge of Truth is to be Saved.”

And the Just perish for lack of correct knowledge of our Doctrines,

Don Jobson, Self-Proclaimed Ordained Gatekeeper and Defender of Truth; Pastor-Teacher-Ruling Elder over the Entire Congregation of the True Remnant of all of our Cyber-Brethern in Arms in the Truth War

*– “Great preacher Charles Spurgeon described “soul-winning [as] the chief business . . . of every true believer.” Step into soul-winning boot camp today with John MacArthur on “Grace to You,” as he studies the lifesaving mission God calls you to.”

**– “John Owen was a pastor-theologian of the Puritan era who understood sin. He really understood it. In his little book, The Mortification of Sin, a tremendous gift to the church, he wrote, “It is to be feared that very many Christians have little knowledge of the main enemy that they carry about with them in their hearts.””—John MacArthur

“Moreover, that it is most solemnly and strictly commanded that we must be baptized or we cannot be saved…” —Martin Luther

We are glad that our baptisms are as meaningless and purposeless as our lives are suppose to be as truly baptism doesn’t save. We are thankful that God has gifted us in this last generation of the End Times with the Greatest Living Teacher of the True Word of God—our very own Protestant Pope of The Truth War—John MacArthur (PBUH) who has come around to correct through Sola Scriptura the Protestant Reformation’s fore-father Martin Luther—the very founder of Sola Scriptura himself 500 years after the fact. Quote:

Faith and repentance are not easy. Submission contradicts the natural disposition of the human heart. And the transforming and sanctifying work of the Holy Spirit is often uncomfortable and difficult.

Salvation would be so much more inviting and enticing to our human understanding if it didn’t require humility, repentance, and the transformation of your entire being. Why can’t it simply be the product of a one-time activity?

For those looking to bypass the difficulty and discomfort of salvation, 1 Peter 3:21 seemingly provides a shortcut in the form of this simple declaration: “Baptism now saves you.” This and a select few other verses are often used to promote “baptismal regeneration”–the view that teaches that one is saved (regenerated) though water baptism. …This interpretation is not true to the facts of Scripture. Throughout the book of Acts, forgiveness is linked to repentance, not baptism. 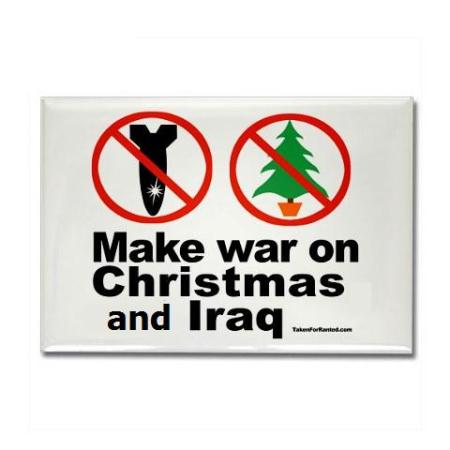 It’s the most Satanic time of the year. Help us out by supporting our Truth War on German Lutherans. You can continue pledging your total allegiance to us by doing this, continuing your committed support of   the Iraq war and outlawing Christmas as one of our most hallowed Discernmentalists has noted: ” Btw, if you want to see a large, lavish Christmas display in a mall… go to Dubai in the UAE! Many countries that are not Christian celebrate this holiday. That right there should tell Christians it’s not of God!”

And you wouldn’t want to do anything that non-Christians let alone non-Americans do. Why if you celebrate Christmas you are supporting terrorism and the terrorists. Most of all how dare anyone have fun or take pleasure and joy in anything….for fun, pleasure and joy are a sin and you know how much our God of Absolute Sovereign Wrath and commendable hatred hates sin and sinners. 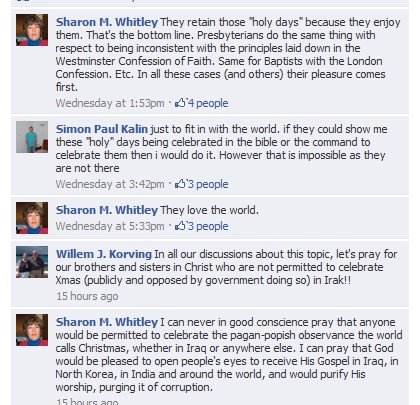 So this December pray that the war on Iraq continues and that more people would open their eyes and make war on Christmas. This message is brought to you by your friendly neighborhood GOIP Committee of Concerned Citizens in conjunction with Killjoy Puritan Calvinazi Church.

The Mighty Slice of Laodicea Retreats back to its lair.

The once mighty and slightly nasty Slice of Laodicea (SoL) has began a retreat to its secret Crosstalk lair. It seems that it is too costly to maintain the hate on more than one site so they ahve abandoned the SoL site. All teh hate one could want to read is now over at their Crosstalk blog where the Cross is rarely talked about but all the gossip on the people we love to hate is there! We here at the ODMafia only feel shame, embarrassment and dishonor at this major setback of one of the major players in the Hate Truth War. We are seriously considering revoking Ingrid’s SODUM membership.


This is what happens at a typical Emergent Church service!  If you know what things happen at those couch and candle driven churches you would be shocked! You would never see anyone having fun in one of our churches! We make sure nothing like that would ever happen!

P. P. S. Dr. Arthur  McJohn reminds you to burn an Anabaptist in Calvin’s honor as a prerequisite for taking our course so that we’ll know that you are Truly Hardcore Deformed Reformed enough like these guys are to pass our tests of True Orthodoxy.