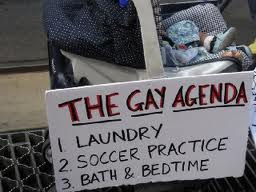 The ODMafia Research Robot Monkeys have done it again….this time that have uncovered the GAY AGENDA. This is not just any agenda, but the official card carrying sign. Today, gays are so brazen so bold as to print their agenda on white bristolboard in black and red markers – out in the open, in public for everyone to see.

For some this will be difficult to handle, but we believe that as mighty truth warriors we need to reveal the darkness of these pagan heathens.

New antigay PSA from us to you!

With all this talk about a gay cartoon rat-agenda I’ve been hearing from Don I needed to bring out this PSA from our past to you from us with new commentaries:

(John) Piper (just like us) accepts penal substitution as gospel and cannot navigate a casual conversation without picking tulips. (Our many enemies) find much of his theology (and ours) to be suspect at best and abominable at worst, but (they are) especially concerned by his (and our) low view of women, whom he thinks should ideally adopt a subservient role in society, not only within their own marriages and churches. He has also stated he thinks wives should endure spousal abuse for a season, for instance, if her husband merely “smacks her around one night.” (By the way, the #MeToo movement came after Paige “Fried Chicken” Patterson recently for similar abhorrent remarks. When is it coming for John Piper?!?) (Anyways) Piper also likes to field questions from his adoring fans, often about sex, which are usually about exciting and fun as listening to your grandfather talking about the subject. If you don’t know anything about John Piper, this video will help. Bring your own vomit bag. 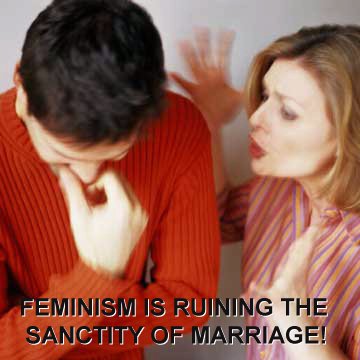 We Know no woman is complete without a man. This is an Absolute Inerrant Biblical Truth. Why? We don’t even have to tell you, because God said it in the Holy Inerrant and Infallible Bible so that settles it. That is the final answer—end of debate—end of discussion. We have the  Absolute Truth of all things all figured out like that—all wrapped up in a nice little black leather package with a red ribbon attached—but just in case you wish to try and debate us (though you will fail because God is truly on our side), we have these fine new Quality Discernmentalist media products for you and the women in your life:

Women need a man because the word man is in the word woman. Guys, having trouble convincing women that they need you because it is God’s Plan for you to control them? Women, do you think you can scrape  by trusting on your own merits and therefore living in the sin that you can be saved by your own works (I Timothy 2:15)? Having trouble finding a truly Biblical and Discernmentalist husband? Never fear we have created this video guide for the proper education of women’s Bible-based role  of being a man’s property.  Introducing The Discernmentalist Guide For Females On Finding A Biblically Correct And Discernmentalist Husband from the creators of  Who Wants to Marry a Multi-Discernmentalist?:

Men already have a wife—well now you need to show her her proper Bible-Based role as your slave. Women already landed a husband—well now you need to know him as your master and overlord (Ephesians 5:22-24 and  I Timothy 2:9-15). Take the next step with our Discernmentalist Guide For Females On Their Proper  Biblical Role As Their Husband’s Slave And Property:

But wait there is more—for futher steps go to Discernmentalist Tube.