As previously mentioned Discerning The World Ministries (DTW) is using SELECT-CAM (officially DTWPIC) to discernmentalize the emerging menace Rob Bell. Just like husbands and wives with selective hearing….DTW has selective(but never never a biased) discernment regarding a host of people and movements.

Here is what DTW found out about Rob Bell (using the select-cam):

“Rob Bell – The Story We’re Telling:    sin, salvation, business, art, justice and the importance of beginning in the beginning”

” [DTW note: they are saying that you have got to go back to the beginning, go back to where ancient knowledge originately from, where sacret arts originationed from in order to move forward. How far do we have to go back? To the very beginning, of course. We, each individual person, needs to eat from the tree of life in order to gain knowledge.

Beginning Now…..lets look at the “BEGINNING”
Ge 1:1 – In the beginning God created the heavens and the earth.

1) All knowledge and ALL things (visible and invisible) would BEGIN with and from God’s creation. Very dark indeed.  Truth coming from God himself…how dare Him!

Ps 111:10 –   The fear of the Lord is the beginning of wisdom; all who follow his precepts have good understanding. To him belongs eternal praise.

2) Hmmmm. Could Rob perhaps be alluding to the beginning in reference to wisdom? Perhaps, but in good discernmentalist fashion DTW does not provide context. Only DTW ‘wisdom.’ Of course we endorse this kind of expert discernmentalism…out of context wisdom.

Pr 1:7 The fear of the Lord is the beginning of knowledge, but fools despise wisdom and discipline.

3) This is astounding. Fools despise wisdom. Not us… we love DTW  ‘wisdom. ‘ Proverbs also suggests that the FEAR (REVERENCE) of the LORD is the beginning of knowledge.  Hmmm. Something must be wrong with this verse because DTW suggests that we must reference satan as the beginning.

We applaud DTWs findings and suggest that every discernmentalist invest in the new select-cam!

Also we have the RIGHT to make spelling mistakes, and determine that wrong spelling is right.

We Know no woman is complete without a man. This is an Absolute Inerrant Biblical Truth. Why? We don’t even have to tell you, because God said it in the Holy Inerrant and Infallible Bible so that settles it. That is the final answer—end of debate—end of discussion. We have the  Absolute Truth of all things all figured out like that—all wrapped up in a nice little black leather package with a red ribbon attached—but just in case you wish to try and debate us (though you will fail because God is truly on our side), we have these fine new Quality Discernmentalist media products for you and the women in your life:

Women need a man because the word man is in the word woman. Guys, having trouble convincing women that they need you because it is God’s Plan for you to control them? Women, do you think you can scrape  by trusting on your own merits and therefore living in the sin that you can be saved by your own works (I Timothy 2:15)? Having trouble finding a truly Biblical and Discernmentalist husband? Never fear we have created this video guide for the proper education of women’s Bible-based role  of being a man’s property.  Introducing The Discernmentalist Guide For Females On Finding A Biblically Correct And Discernmentalist Husband from the creators of  Who Wants to Marry a Multi-Discernmentalist?:

Men already have a wife—well now you need to show her her proper Bible-Based role as your slave. Women already landed a husband—well now you need to know him as your master and overlord (Ephesians 5:22-24 and  I Timothy 2:9-15). Take the next step with our Discernmentalist Guide For Females On Their Proper  Biblical Role As Their Husband’s Slave And Property:

But wait there is more—for futher steps go to Discernmentalist Tube. 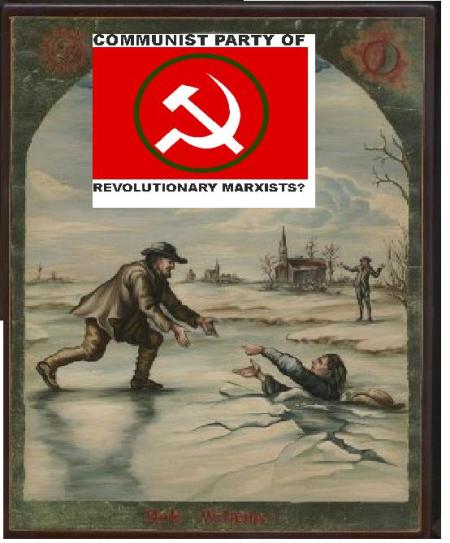 The story of Dirk Willems, who, when he heard that the sherif pursueing him for his Anabaptist beliefs had fallen through the ice, turned back to save him is often considered by Anabaptist hagiographers to be a key example of their practice of Christian charity.

(Ana)Baptists of all countries — repent!

Karl Marx, himself a stepchild of the communistic Anabaptists, loved to enjoin: “Workers of the world — unite!”480 But, standing upon Scripture, Christian Calvinists now say to all such stepchildren: “Anabaptists of all countries — repent!”

We therefore call upon all of the various stepchildren of the Anabaptists — including justified Baptists; heretical Seventh-day Adventists; apostate “Jehovah witnesses”; polytheistic Mormons; and atheistic Communists — to repent of their great sin of antipaidobaptism (and of all their other sins).

Clearly  Baptists are in error for following the Bible in baptizing believers instead of following  Calvin’s Pure Doctrines of sprinkling infants. Communism and Socialism are what inevitably happens when one takes  the words of Jesus seriously in the Bible rather than following Calvin’s interpretation of the Bible exclusively. Jan Markell warns of following Jesus too literally:

They feel it is convenient to blot out the words of Paul on homosexuality and focus in on the good deeds Jesus talks about. Most are pacifists who reject an “eye for an eye” (Leviticus 24:19-20). They focus on Jesus’ words about helping the poor, ministering to “the least of these” (Matthew 25:40), loving our enemies, etc. That justifies abandoning hundreds, even thousands of condemning verses in the Bible they choose to wish away. That makes homosexuality OK and war wrong! And remember, Paul and the others in the Bible represent Jesus’ words. They were His spokesmen.

Some who believe this way practice a form of neo-Marxism and others would call it “Christian Marxism” — an oxymoron if there ever was one. They note that the early church shared everything (socialism).  A close cousin to this is “liberation theology.”

Those who are high profile in this movement include Jim Wallis, Tony Campolo, Brian McLaren and his Emergent bunch, and the National Council of Churches. Jim Wallis says, “In those red letters, Jesus calls us away from the consumerist values that dominate contemporary American consciousness.”  Translate that to mean he loathes capitalism and opts for socialism and/or communism.

We Know that “social justice”  is an evil word  and that John Calvin and Ronald Reagan had nothing to do with such a horrible thing as the Social Gospel and if they had nothing to do with social justice then Jesus certainly didn’t. Glenn Beck adds that “Social justice “is a perversion of the Gospel,” and “not what Jesus was saying” when He was teaching on justice and social sins. We agree and Know that the Socialist Gospel is a product of Credobaptism as Credobaptism denies the Pure Doctrines of “Original Sin” and “Total Depravity (Total Inabillity)” just listen to this heretical Baptist quote: “God imposes the necessity of sin on nobody.” My head is still shaking from all that Evilness! What an attack on God’s Absolute Sovereign Wrath! Credobaptism in the words of GOIP Discernmentalist Sharin’ Whiplash is “man-exalting”:

Certainly Credobaptism is evil since it promotes confusion this is why I Thank You, Lord, for Your servant, Jean Cauvin, without whom we would be still struggling in the darkness of Credobaptism, that man-exalting heresy! Besides Immersion sounds too much like the heresy of Emergent/Emerging or Emergence Christianity.

Truly anything man-exalting promotes Marxism, Communism and Socialism—this is why all Baptists are heretics. We along with Glenn Beck urge all Baptists to leave their Marxist Social Justice-promoting false churches and join a True Church that teaches the Pure Doctrines of Discernmentalists like The Protestant Reformed Churches in America, the Reformed Presbytery of North America, General Meeting (RPNA-GM) or the Reformed Presbyterian Church, Covenanted (RPCC)—just avoid the Presbyterian Church in America (PCA) like the plague as they are too soft  on Evolution and anti-theocracy and especially avoid the The Presbyterian Church (U.S.A.) or PC (USA) as they are neither Presbyterian nor Christian.

Discernmentalist after undergoing Cybernetic Heresy Hunting Surgery threatens an Emergent heretic with the Gospel of God’s Law and Wrath and Hell.

We’ll also be able to teach Discernmentalist skills such as Self Righteousness to a wider range audience: 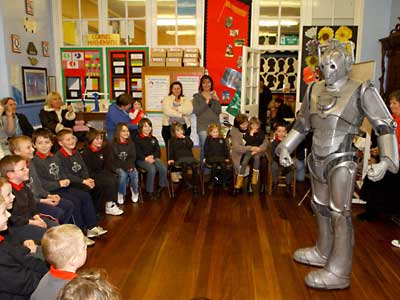 And in the end our army of Discernmentalists after undergoing Cybernetic Heresy Hunting Surgery will be able to bring Doomsday upon all that we deem heretical: 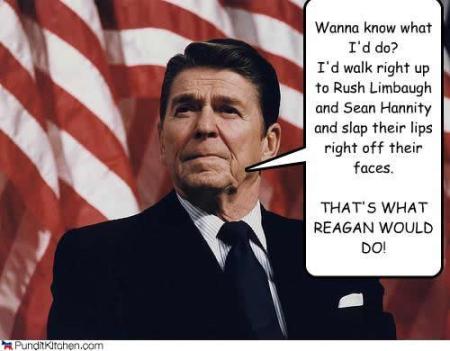 Discernmentalists just over a few hours ago our WWRRD? Campaign has come under attack. In a related story our Research Robot Monkeys have stumbled upon a Ring of  Counter-Discernmentalists who have counter discernmentalized all of our wise and 200% Absolutely True discernmentalizations. Utilizing Eric Barger‘s Bible Based Logic And Slander techniques and course on Guilt By Association rhetoric—these so-called “counter-discernmentalists” have called Final President Reagan a “liberal apostate heretic.” How dare they! They figured this based on these factors:

P. S. Calvinism isn’t based on the philosophies of the Roman Catholic Saint Augustine

How dare they attack our Absolute Truth Doctrines! We traced the source of these attacks and counter discernmentalisms to anti-Brannon Howse Counter-Discernmentalist Sam Rima and the Beliefnet.Com blogger Terry Mattingly. We are outraged which is why we will keep up this Truth War to preserve and protect Final President Reagan’s fragile Sovereign Legacy over America—God’s Holiest and Chosen Nation—so remember WWRRD? (What Would Ronald Reagan Do?).