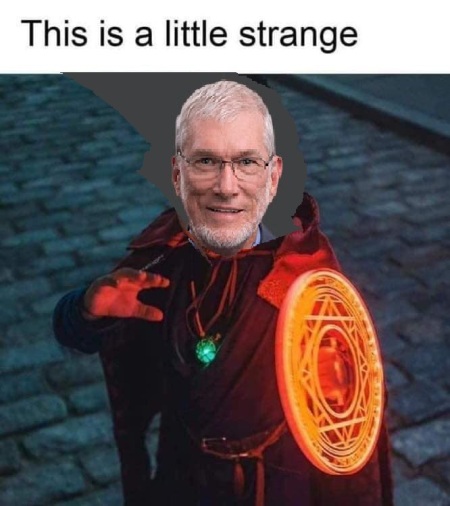 In a shocking move of Discernmentalism noted Creationist and award-winning Discernmentalist apologist Ken Ham of Answers In Genesis fame accidentally converted a seminary student recently (around last year) to atheism:

… When [Ham] debated Bill Nye the Science Guy on the scientific legitimacy of creationism, I was about halfway through law school and organized a debate watch party, ordered pizza, and gathered my evangelical colleagues to root for Ham together. So imagine how devastating it was to watch my childhood icon be so embarrassingly destroyed before my very eyes. Ken Ham brought faith to an evidence fight, and even my fundamentalist creationist eyes could see it. I resolved in that moment to learn more about evolution, astronomy, and geology so that, when it was my turn to debate the Bill Nyes of the world, I would do better than Ken Ham had. … my desire to be an effective apologist left me with nothing to defend. I had wanted nothing more than to reinforce my faith, but willing myself to believe something that just didn’t make sense was no longer sustainable. So adrift on a sea of chaos, I called my then-fiance, who was doing missions work in Asia at the time, and begged her not to leave me as her faith insisted she would have to.

I can’t speak for anyone else who’s left Christianity or what they are looking for, but for me, the best community so far has been Humanism, starting around early 2018. … and dialogue robustly about thought-provoking issues where questions, not creeds, unify us. As we grow, we may just find a use for some of those empty churches after all.

Now that I spend most of my days with people who have left or are still leaving Christianity, I’ve come to appreciate Pascal’s Wager differently. Never in any stage of my journey have I met a person who converted to Christianity because of Pascal’s Wager. But what I have encountered are countless instances of Christians who stay in the faith in spite of their doubts because of Pascal’s Wager. To someone who already experiences Christianity as their normal and sees nonbelief as the scary unknown, it is an apologetic tool that works as an incredible holding strategy. Evangelicalism, though, is on the decline. As fewer people each generation grow up with Christianity as their normal, the apologetics that have been fairly effective at keeping believers in will have to evolve if they want to move forward in an increasingly secular world.—Luke Douglas

Here another soul has been lost to atheism. Not to mention you can see the mental deterioration of this sad atheist, as Ken Ham did not use proper pre-suppositional apologetics like our site to stand firm in our Doctrine and destroy Bill Nye…for shame! For shame. He should have used Hoofendorfer’s Law as we are always right.

A Post Of Dr. I. Todyaso’s related to this one: Proof atheists become dumber when listening to Brannon Howse

Pomotivator from the once mighty Hugh Jass Spurgeon site of Phil Johnson—now gone just like his Hugh Jass though he still is a Hugh Jass every now and then. *

Reliving our glory days of the Truth War—Dr. I. Todyaso is proud to introduce our newest old course on apologetics aka Apoolajetix to help aid new and future Truth Warriors/Discernmentalists in their Researchmentalism in the defense of our  Pure Doctrines that are always under attack and in need of being defended by us:

Pooling together our ignorance from around the web via Eric Barger’s Bible-Based Satellite System (BS) and Stretch Technology we can find the Answers In Genesis to all the problems we need to Take A Stand on with our Pulpit & Pen. Helping us Slice any truth to fit our narrative in our Battle 4 Truth that we’ve already presupposed to be true and need to be Apprising everyone of.  We must Stand Up For The Truth and always be Defending (and) Contending for this truth using our Christian Research Network of True Bible Believers —who help spread our Doctrines via Lighthouse Trails and our seminars at Wordview Weekend through the administration of our annual Worldview Tests/Checkups.

We need to be Pyromaniacs for our truth but without Charisma just like any real Christian Apologetics and Research Ministry —we should follow the Way Of The Master that leads to Living Waters like Ray Comfort Hell’s Best Kept Secret instead of doing real research as real research leads to unWretched ideas. One of these ideas is forming a Gospel Coalition around Social Justice and social issues like ending hunger and poverty alleviation —pure blasphemy as the only real social issue that one Desiring God should care about is that we Abolish Human Abortion  just like our Angry Sovereign God desires.

This will help us be Rapture Ready—for Jesus Is Savior of the American Vision of Gary North and Thomas DiLorenzo which is the same as ours and helps us to Act for America by our Stand With Israel and being WallBuilders to protect our beliefs from the same government that we use to spread our Doctrines. Also remember to only get your news from Fox News; Breitbart; World Net Daily or any other Conservative approved (except for Libertarian) news source and remember to listen to Rush Limbaugh; Info Wars and Michael Savage on the radio everyday and like Eric Metaxas and Dinesh D’Souza read our Most Biblical and Godly President’s Tweets everyday as well in order to keep our Doctrines as Pure as the Puritan Hard Drive for we all know that we discernmentalists are really the Alpha & Omega of truth.

However you should never under any circumstances go to sites such as Scott McKnight’s; Warren Throckmorton’s;  David Gushee’s or Christ And Pop Culture nor any other site that discernmentalists have Quall(ed)Out and disapproved of as that might lead to the Bible Gateway into biblical scholarship  or worse you  may discover Catholic Answers instead of ones approved by us—besides everyone knows we discermentalists like to avoid the Bible especially Act(s)3 as much as possible whenever a Spurgeon quote will suffice like most of the online followers of Grace To You  believe.

This our subservient students is the secret to defending our hard doctrines of True Biblical Christianity that is our Extreme Theology of Monergism wedded with Ayn Rand’s Objectivism  which  are always being perverted; always under attack by our many enemies and always in need of defense by us.

An unrelated post from our past related to this one: Brian McLaren declares the Kingdom of God is here and now!

For our trusty discernmentalist readers…..more discernmentalism to come! We don’t apologize for being gone so long (we never have to apologize because we are never wrong)….we have been fighting for truth and consumerism. Stay tuned….