“Great preacher Charles Spurgeon described “soul-winning [as] the chief business . . . of every true believer.” Step into soul-winning boot camp today with John MacArthur on “Grace to You,” as he studies the lifesaving mission God calls you to.”

Christian Research Network using backbones transplanted to them after the passing of our late mentor add:

The emphasis on being “missional” is often made in such a way so as to insinuate that all they are really doing is removing the Gospel message from cultural constraints. (Source)

The Missional deception is a change of emphasis in a church from outward focused evangelism with inward focused spiritual growth to inward focused “evangelism lite” with little or no emphasis on the spiritual growth of the members. The Church was viewed by our pastor and his people as their “church plant” in our community from which they would be a missional focused church ministering to the seekers who came to see what all the fuss was about. What is “Missional”? Is it the same thing as having a missionary focus like that church I used to belong to before its takeover by the Innovation Cult? No, it is different. The first way it is different is that it sees itself as “incarnational.” What does this mean? Instead of the focus being on the church and what goes on inside as far as worship, Bible Study, fellowship, and preaching, the emphasis is on being involved in the community. (Source)

From all this we can conclude that JMac (PBUH) has emerged into a Missional church mindset—condemned by his own words:

“The movement’s main trendsetters relentlessly pressure pastors to contextualize their ministry and message so that the church can stay in step with these postmodern times. Missional strategies that truncate the gospel or overshadow it with gimmickry and entertainment are not going to win the culture in this or any other age (Rom 10). In fact, the quest for the world’s approval is nothing less than spiritual harlotry.”

Update- our keen researchmentalists have pointed out this previous post of ours proving this post further as we’ve already apprised:

Are The Council on Biblical Manhood and womanhood Evanjellyfish? 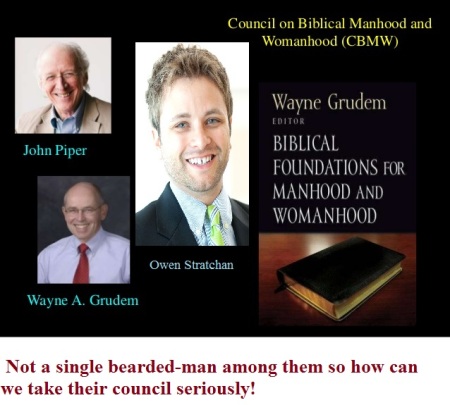 The Council on Biblical Manhood and Womanhood (CBMW) exposed as weak gutless grace wimpy girliemen as per our Clear Teachings that all Truly Biblical manly-men have beards. In fact we’re beginning to question the Spine of their doctrines as they claim to teach gender distinction but are all clean shaven men. Where does such thinking come from? Where is the consistency when it is taught women have to dress like women and know their place but men can claim “christian liberty” when it comes to shaving off the God given mark of masculinity.

Only spineless Evanjellyfish would shave their beards off—now we all know Spurgeon the Prince of Preachers had a beard that’s why his Doctrines were so Pure as did Calvin. Luther once had a beard but had a lapse of judgment and shaved it off—if only he had followed Calvin’s example when he started the Protestant Reformation when Calvin was only 8 years old. We believe that’s why he erred in attacking our Truth that Calvin’s teachings are the most important teachings in all of Church History as any True Reformer would like John MacArthur (PBUH)*:

It is recorded that Luther later said that Calvin was “educated, but strongly suspected of the error of the Sacramentarians.”[1] That is, that Calvin did not believe the same things regarding the Lord’s Supper as the Lutheran Reformers.

In this it appears that in Luther’s grand biography Calvin does not receive a great deal of mention. For Luther, Calvin would appear perhaps as a footnote.

How can the CBMW expect to stop the GLBT hordes if they refuse to follow the Bible’s Clear Teachings that all True and Godly manly-men have beards?

In our current culture, the progressive trends of gender confusion and transgenderism is all the more reason we should uphold the biblical picture of a masculine man by having beards to stand separated from the pagan culture of today.

Thankfully you have True Bible-based ministries like ours with the Spines and beards to prove it to help protect you in the Purity of our facial hair—and the Sound Doctrines of the Ways of the Master himself which teach Absolute Biblical Truth in his book The Truth War: Fighting for Certainty in an Age of Deception from the spineless beardless GLBT Evanjellyfish agenda slipping into our churches.