We have been asked so many times lately “Are you serious?” so I decided to do a page dedicated to just how serious we are.

There are many blogs out there that are as serious as you take them. We are one of them. If you take Slice of Laodicea or CRN or Ken Silva’s personal website in all it’s glorious missivness, serious, then yes, you better take us even more serious. If you do not take these people serious I doubt you will take us serious so you should just hope you are regenerate and repent.

I hope that clears the rumors up about what we are all about.

Why Shane Claiborne is not saved. 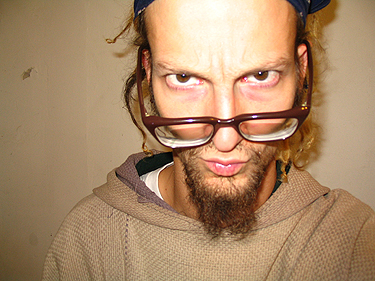 Here are the facts as to why Shane Claiborne is not saved.

2. Ken Silva said so and also said Shane is a liar.

3. Ingrid of Slice of Laodicea said so.

5. Did you look at that picture? He does not look like he is saved to me!

Now, we know that Shane can blame it on bloggers for the Conservative Cedarville University telling him to take his “red” (as in commie) letter bible and go home to his emergent village and sit in front of his guru Tony Jones and Brian McClaren and smoke more doobie from their emergent hookahs.

I hope that is enough proof to show that Shane Claiborne who likes to go to other countries (like Iraq) and “minister” is really not saved and is going to his Universalist hell in a hemp weaved handbag.

Surely, goodness and kindness will follow me all the days of my life,